Here she is.  My beautiful Sophie.  Feeding.  Looks all very normal doesn’t it?  But the reality is that this was a rare moment in time.  I suppose we don’t take pictures when we are busy dealing with a screaming infant.  And crying tears of our own. The truth is that feeding Sophie was fraught with difficulties.  Some of my earlier posts talk about the trials and tribulations.  Here are some things I wish I had known back in that dark and stormy time….

That my daughter’s difficulties with latching and feeding were in part due to low tone/ hypotonia  (http://www.healthline.com/symptom/poor-muscle-tone),  and not my inadequacy as a mother.

That my daughter’s reluctance to feed was exacerbated by pain from reflux…the pain of feeding became an association…”drinking equals pain, therefore why should I drink?”

That my milk supply was drying up as a RESULT of my daughter’s inability (and reluctance) to feed well, not because I was somehow incapable of supplying the milk she needed. (That should have been a “no brainer”. I started with milk spurting from both breasts, breasts rock hard and leaking. My supply diminished over time as her reluctance to feed increased.)

That (as a general rule) breastfeeding associations and lactation consultants are far more used to working with “neurotypical” children than children with “special needs”, and that, unfortunately, much of the advice they had to give was not going to help my daughter.  Being aware of that could have saved me a lot of pain in wondering why, even when I followed every (sometimes conflicting) instruction I was given, we were still experiencing difficulties.

That squeeze bottles designed for babies with cleft palates (http://www.cleftsmile.org/category/cleft-general/) can also be amazingly helpful for children without cleft palates, but who are having trouble with sucking and swallowing.  That piece of information could have saved us a small fortune.  When I weaned Sophie off the breast (in desperation) at 6 months, I think we bought just about every bottle and teat on the market.  Except a cleft palate bottle. 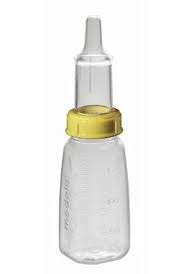 That breast pumping (particularly with an electric pump) is difficult.  And can feel humiliating.  But that it is okay to struggle with it.  It is not meant to be easy.  And it is worth it.  Sometimes.

That once I was at the end of my tether with trying to pump, and finally had to introduce formula, I should have been offered the option of mixing some formula bottle feeds with some breast feeds, rather than being bullied by hospital nurses to completely wean my daughter onto a bottle.

That weaning your child off the breast is not the end of the world.  Sure, I would have LOVED to have breastfed Sophie until she was at least 12 months old, if not longer.  But in all honesty, it was better for my mental health (and therefore our whole family) for me to be able to share the feeds with my husband.

That my daughter would drink FAR better from a sippy cup than any bottle (perhaps due to the nipple/teat feeding experience being associated with pain?).  When we introduced her to one, she couldn’t hold the cup or tip it herself, so “technically” speaking, she wasn’t “ready” for one…but it worked.

That reflux medication is a temporary (and welcome) relief, but by no means the answer to “fixing” feeding issues.

That children with gastrointestinal issues and/or food intolerances and /or allergies can react even to specialised hydrolysed/hypo-allergenic formulas…even though some paediatricians will swear black and blue that it is “impossible” for a child to react to those formulas. As the formulas are “denatured”, and the proteins are broken down, so there is “no way” that those formulas can cause issues.

That there is currently no standardised, accepted test for detecting delayed food allergies (also known as food intolerances).  There are many methods of testing (skin prick tests, patch tests, blood tests), but none of them are completely accurate.  These tests can be excellent for showing anaphylactic (immediate and often life threatening) reactions.  But some foods can “creep up” on your child.  Small amounts over several days can trigger reactions such as eczema or sore tummies.  And there is no reliable testing available.  If a child tests positive for a particular food intolerance, it is almost certain they are intolerant of that food.  However, if they don’t show a positive result, it doesn’t necessarily mean they can tolerate that food.  They may still be intolerant or allergic. There is a lot of trial and error involved to determine which foods may be causing issues for your child.

That changing my daughter’s diet in an extremely radical way would change her life and ours forever.  For us, it was the GAPs diet (http://www.gapsdiet.com/) that transformed  our lives.  Sophie went from multiple stinky diarrhoea poos per day to normal gut function, and from waking every 45 minutes throughout the night to sleeping through.  I’m not suggesting that GAPs is the right approach for every child, I’m not a dietitian, I’m just a regular mum.  I’m simply stating that dietary intervention made a huge difference to us. And GAPs doesn’t have to wait until your child is on solids – there are protocols available even for infants who would ordinarily still be fully breastfed or formula fed.

That in the end, I already knew all this in my heart (except for the cleft palate bottle option, and the bit about the GAPs diet).  And that if I had my time again, I would not have allowed the medical profession to have so much power over me that I questioned myself at every step.

And most importantly…I wish I had known that, one way or another, I would figure it out in the end, and things WOULD get easier.  Sure, other “special needs” mums told me that, repeatedly.  But at that time, I really couldn’t believe it.  Our lives were consumed with trying to get nutrition into our daughter.  I was terrified.  I saw no end in sight.  But you know what? Those mums were right!  At some point, you will figure out a way.  Whatever it takes. And it will get easier. I’m not saying that a child who can’t eat will miraculously be able to eat.  But even if your child has to have a PEG (http://synapse.org.au/get-the-facts/peg-feeding-tubes-fact-sheet.aspx)…once you get there…once you finally figure out what needs to be done to get calories into your little one…the dark cloud will lift.

To all you mums out there struggling with feeding. .. my heart goes out to you.  I wish you wisdom, peace and respite from the constant questioning and fear.  Listen to that inner guidance.  Trust that voice inside.  Do your research.  And then do whatever you think needs to be done. Whether that be persevering with breast feeding, bottle feeding, nasogastric feeding or a PEG.  It is incredibly difficult to listen to your gut when you are on high alert, stressed, fearing for your baby’s life as they “fail to thrive”, and being given advice by people who you believe to know better than you.  But as a loving mother, you have all the resources you need to figure out what is right for your child.  Research, join support groups for parents with special needs, and listen to your gut.  Don’t be afraid of being judged.  Best wishes to all of you who are in the dark place.  Keep the faith.