Sophie was two years and eight months old.  She had finally mastered all of her vowel sounds and many consonants, and was putting together some lovely phrases.  Her articulation was still far from perfect.  Most people who didn’t know her struggled to understand almost everything she said.   But her progress was undoubtable, and more than we could have hoped for.  She was speaking fluently, with good vocabulary, and her only hurdle now was the issue of intelligibility.  She had come so very far.

Then, all of a sudden, out of nowhere – she developed a stutter.  Not just an occasional stutter.  A distinct and constant stutter.  Every word that came out of her mouth was laboured..   “M-m-m-m-m-m-mummy, I am h-h-h-h-h-h- ungry…I w-w-w-w-want f-f-f-fwuit”.

I felt my stomach drop.  What was this?  Why?  Why, after so much hard work, did she now have this setback?.  It came on over the period of about three days.  From nothing, to full steam ahead.  It was in every utterance.  And it could not be ignored.   With each passing day my worry grew, with each passing day her stutter got worse.

Here is a sound clip of her trying to say “Trying to lock that..need to move the other door”.

After about two weeks I was able to get her in for an assessment with her speech therapist.  He recorded her talking, dutifully undertook a “stutter count”, and came back to us with the news that she had “a  severe to profound stutter, that would definitely need intervention, and would not resolve on its own”.  On the bright side, he assured as that as we had caught it early, chances of it resolving with intensive therapy were very good.

Stutter remediation therapy was to start the next week.

That weekend we went to a birthday party.  Sophie’s therapist had advised not to draw attention to her stutter, and to give her every opportunity to finish her own sentences.  I handed  a note around to the party guests.  This is what it said:

Sophie has developed a stutter.

For some reason, during the course of that party it all became too much for me, and I ended up leaving in a puddle of tears, asking Sophie’s dad to take over the reins for the night.  I headed to a fellow special needs Mamma’s house,  where I proceeded to cry, drink some wine, cry some more and then sleep.

I returned home the next day with a forced smile on my face, and went through the motions, wishing it was Wednesday so that therapy could begin and we could start to “fix” this damn thing.

That night we had Sophie in the bath.  There she was, all slippery, wet, gorgeous toddler enjoying her bath, playing with her plastic cups and her dolly.  Then she stopped playing for a moment.  She picked up her doll.  She picked up a plastic cup.  She placed it on the dolls right hand.  She whispered (with not a HINT of a stutter) “This is the mummy”.  She picked up another plastic cup.  She placed it on the doll’s left hand and whispered .. “This is the Daddy”.  Then she held one cup in each hand and pushed them together (as if giving the doll some kind of hug).  And in her beautiful squeaky little voice she whispered… “It’s alright mummy, I’m okay,  It’s alright Daddy, I’m okay”.    Calmly, quietly, deliberately.  Without a HINT of a stutter.  It was like a kick in the guts.  But the best kick in the guts you could ever hope to have.  It took my breath away.   I gave her a hug, dried her off, tucked her up in bed.  And then went to my own bed where a flood of emotions and thoughts and realizations hit me.

I realized that every time we “played”, I was using “therapy tools” that we had learnt to try to help her development.  I realized that since the time I first became aware that her development was delayed, I had not bought her a SINGLE toy “just for fun”.  Of course I had bought her things that would be fun – but every purchase I made had the background thought of “How will this help her gross motor development?  How will this help her fine motor development”?  Will this help her speech development?”  I had taken the recommendations of the therapist too far.  I had turned every interaction we had into a home therapy session.  I never really relaxed and just PLAYED with her.   I was so scared about so many things, and so desperate to make sure that she would “be okay” that I had forgotten to enjoy her.  I had been too busy trying to “fix” her.  And I knew  know that had to stop.   Right there and then.  Because for her to really truly “be okay”, no amount of therapy in the world was going to cut it.  What she needed was her mum.  Playing with her.  Having  normal, natural, loving interactions WITHOUT an agenda,

And so it stopped.  Right there and then.  I woke the next morning and went to her. I did not try to correct a single utterance that came out of her mouth.  No more did I ask her to try to repeat a sound until it was “just so”.   I didn’t try to help her master her fine and gross motor skills as we played.  Instead, I was just with her.  Being there.  In the moment.  Reading to her.  Playing with her.  Not thinking about what needed to be “fixed”, or what her next therapy goal was.  With the clear guidance she had given me the night before, I accepted that she would be alright.  I changed my intention when I played with her.  I dropped my agenda.  I finally allowed myself to just BE with her.

And then the miracles came.  Showing me that I had truly heard my daughter’s message.  Sophie’s stutter disappeared within the course of a week.   My own stress levels dropped dramatically.  Our bond solidified, my anxiety decreased, my belief in a better future increased and we both blossomed.  Finally I could breathe, and so could she.

We took her back to her speech therapist for what was to have been her first session to  address the stutter.  But she had no stutter.  Her therapist said he would never have believed that her stutter had been as severe as it was if he hadn’t witnessed it himself.    He wrote to us saying:

“I was really amazed to hear Sophie’s speech on Monday. She did not stutter! Spontaneous recovery can happen in stuttering but not usually from the type and severity of stutters that Sophie was making. Amazing stuff!”

And he later went on to write his thesis about stress and stuttering, as a result of this experience.

Now I’m not suggesting that mums or dads should stop trying to help their kids.  I’m not suggesting that parents stop trying to implement the techniques you learn at therapy in the home environment.  I believe that Sophie would not be where she is today if she hadn’t had help both from professionals and in the home environment.  She needed therapy. Early intervention was critical and beneficial.  But  what she DIDN’T need, was for her WHOLE LIFE to be about therapy. And as a mother, I didn’t need my whole life to be about being her therapist.  What we both needed was time to just be mother and daughter, enjoying each other.  So after more than 2 long years of being her every day  therapist, I finally sat back, I stopped pushing so hard.  I decided to let the therapists do the work and to take a break from it at home.  A decision I have never regretted.

Over the years we have been through periods where I have had to do therapy work with her at home again.  But never to that extent.  Never have I lost the lesson she taught me.  Which is that our children need us to be their mums, before they need us to be their therapists.  Enjoy your child.  Stop.  Breathe,  Take time to smell the flowers. Don’t make it all about therapy.  Because sometimes, enough is enough. 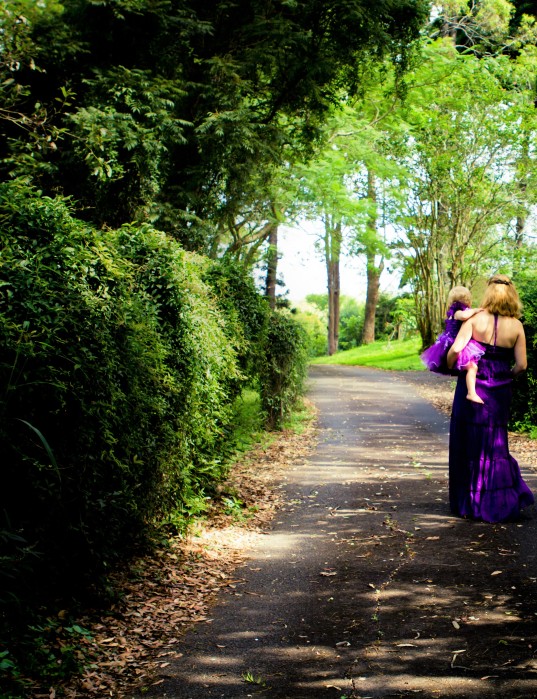