I love to celebrate my daughter’s life.  My facebook feed is a chock full of pictures of my beautiful girl grinning away with delight, exploring the world and enjoying her life.  And I am beyond grateful that we have so many wonderful, wonderful times together.  Times during which she has not a care in the world, and all is as it should be.

Seeing this flood of happy images, one would probably find it hard to imagine that my beautiful daughter suffers from clinically diagnosed anxiety.  It is estimated that up to 80% of individuals with Aspergers have anxiety (as do many children with Kabuki Syndrome), so Sophie is certainly not alone.

It is important to remember that people with autism have differences related to their diagnosis that increase their chances of having anxiety.  Differences with how they see, hear and feel things in the world (sensory processing) can lead to exaggerated stress responses.  Difficulties with understanding social cues and navigating social interactions can also lead to exaggerated stress responses.  And it has been shown that some people with autism actually have an enlarged amygdala.  The amygdala is the part of the brain that initiates the fight or flight response – and the amygdala can’t distinguish between a real threat and a perceived threat.  So there are physiological differences in people with autism that are also linked to heightened anxiety. Add all of these things together, and your chances of having anxiety are significantly higher if you have autism.

Unfortunately, there can be a great deal of misconception around what anxiety actually looks like, especially in children who are autistic.  Sometimes we see behaviours and attribute them to other things.  And if you don’t recognize my daughter’s anxiety for what it is, you may be tempted to judge her.  So today I want to share a little about how Sophie’s anxiety presents – not because I want the world to see her as “broken”, but because it is only with knowledge that understanding can come.  And my little girl has been misunderstood too many times.

When my daughter sits in the library by herself every lunch hour – it is not because she is just “the quite kid”, or a kid who isn’t interested in playing with others.  And it is not because she doesn’t enjoy outdoor play, or physical play.  Sophie is a gregarious little girl.  She loves people.  She LOVES the play equipment. She BEGS me to stay after school so she can climb the ladders and swing on the ropes. She WANTS friends.  She is sitting in the library by herself because her anxiety about what to do in the playground and how to manage all of the social interactions and expectations is overwhelming.  What if she asks someone to play and they say no?  What then?  What if no one asks her to play?  What if someone suggests something that she doesn’t want to do?  What then what then what then?  It is easier for her to retreat to the library than to deal with the intricacies of poorly understood social rules, the fear of the unknown, and the fear of potential “failure”.

When my daughter bursts into hysterical tears after arriving at her Girl Guides Halloween disco and begs me not to leave, and starts gasping and rolling her eyes – it isn’t because she is afraid of the scary costumes.  She has in fact just spent hours selecting her own scary costume, excitedly repeating that she can’t wait to get to the disco, that she can’t WAIT!  NO – it wasn’t the costumes at all – it was the fact that she was afraid that the other kids wouldn’t like her dance moves.  And this fear of what others might think has crippled her, left her terrified, left her suddenly unwilling to participate in the event she has been looking forward to for days .

When my daughter bursts into hysterical shrieking when we decide to go to a new Thai restaurant for dinner, instead of going to the local steakhouse that we had briefly discussed – it isn’t because she is throwing a tantrum to get her own way.  It is because she had already planned in her mind how the evening would go.  She had already imagined herself sitting in the Kids’ club, doing some coloring in, and she had already picked out the meal she planned to eat.  She was feeling safe and comfortable, she felt as though she knew what to expect.  Now all of that has changed.   She doesn’t know what she is in for.  What if there is nothing she likes on the menu?  What if the lights are too bright, the noise too loud?   What if there are no activities for her to do?  What if what if what if?  The fear of the unexpected can be overwhelming for her at times.

Now sure, all kids have fears.  But anxiety is different to fear.  Anxiety can be crippling,  Anxiety can (and does) lead to social isolation.  And it doesn’t always look like what you think.  People with autism experience the world in a different way to most people, and that world can sometimes be difficult to understand.  There are times when even I, as Sophie’s mother, can’t figure out what has triggered her anxiety.  Sometimes I don’t know until months later, when she will whisper quietly to me about it as I lie next to her for songs at nighttime.  So I don’t expect everyone to be able to figure it out all the time.  All I am asking is to please be gentle with my daughter.  Don’t judge.  Don’t assume you know WHY she is acting in a certain way.  Just know that she needs to feel safe, and that she sometimes needs to be supported to fully engage with the world around her in the way she wants to.

So what does this have to do with pink tigers?  According to Deborah Lipsky (in the book From Anxiety to Meltdown)

“People with autism are like tigers.  A tiger’s natural environment where they are content doing what comes naturally and instinctively to them is the jungle.  You can put up a circus and train us to jump through hoops – for that is what is expected of tigers so that they fit in an environment not their own.  Still a tiger is a tiger, and has natural instincts that are best subdued or dormant for a while but can break forth at any time.  People shouldn’t be shocked when a wild animal such as a tiger suddenly and without warning attacks its trainer.  Children on the spectrum are expected through much intervention to adapt themselves into a foreign world that goes against their natural “nature”.  It is no surprise that tantrums, meltdowns, and bad behaviors “break forth” without any reason apparent to the non-autistic bystander.”

Sophie has had lots of intervention over the years to help her deal with her anxieties.  She has had occupational therapy, social skills classes, psychology appointments and of course lots of loving input here at home.  But the tiger can’t always be tamed.

And the tiger in my house is a pink one 😊 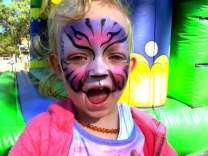